I’m a huge Dragon Ball fan. I’ve been watching Dragon Ball, Dragon Ball Z, even GT and nowadays Super ever since I was a kid.
I grew up on the Dragon Ball franchise. I remember going to school every day and talking about the latest episode of DBZ that aired on Cartoon Network.
I don’t know how many of you guys watching had Gameboys back in the day, but I remember as far back as Dragon Ball Z: Legendary Super Warriors for the Gameboy Color and Dragon Ball Z: The Legacy of Goku for the Gameboy Advance.
Yes I really am that old that I played early 2000’s Gameboy games as a kid.
We’ve come a long way since way back then with games like Dragon Ball Z: Xenoverse and Dragon Ball Z: Kakarot being what kids play these days.
And don’t get me wrong – they’re great games in their own right. But even with great games like those, what we need is a Dragon Ball MMO that can bring that audience – the audience that love DBZ games over into the MMO-verse.
Legend of Time and Space might very well be capable of doing that.

The announcement specifically was made during ChinaJoy 2019 where the game was shown off – with hours worth of footage being released.
That footage, which is courtesy of MMO Culture, shows a lot of what the game is like.
While there’s still plenty left to the imagination, here are a few things I’ve learned: There are currently 4 playable races: Saiyan, Human, Majin and Namekian.
Each race has their own base statistics, with the example being that the Majin have the highest defense as the game itself states that they’re designed to be utilized as a tank.
Namekian’s are a ranged race – with them focusing on “long-range support,” whether they’re capable of focusing on long-range offensive spells and healing spells is up for discussion but currently it looks as though they’re the game’s designated healer.
If you’ve ever watched the Anime you’ll understand why Namekian’s are likely the healers with their regenerative capabilities.

Neither the Human’s or Saiyan’s have had their roles revealed yet but judging by what we know from the Anime, it’s likely that the Human’s will be more focused on close-range melee damage whereas the Saiyan’s.. well that’s anyones guess.
One thing I would like to note though is that the person that streamed the content went on to state that the game itself, although it looks better than the current Dragon Ball MMOs available.. was worse than any modern mobile game he’d ever played.
He went on to elaborate by stating that the team that made the game should disband – which honestly seems a tad bit harsh in my opinion as I’m sure it’s still a very active work in progress right now.

The game isn’t an open-world MMO. Instead, the game utilizes segregated zones to divide the world into several smaller areas. These areas however allow for hundreds of players to occupy them simultaneously.
They’re – I guess, the closest comparison I can make is Blade & Soul, Final Fantasy XIV or Guild Wars 2: There are loading screens separating zones but those zones aren’t instanced in any capacity.
One thing I do find concerning – at least right now, is the fact that the game utilizes a very prominent auto-pathing system.
I know that this is a Chinese MMO and it seems that every Chinese MMO I’ve ever played – Perfect World, Revelation Online and even Moonlight Blade have a very large emphasis on auto-pathing.
But I still dislike it, even if you don’t technically need to use it. It just makes people rely too heavily on it and is a lazy design choice.

Then there’s the combat. You’d think with how good the combat is in the Dragon Ball games these days the combat would be something they deemed important enough to focus on.
This is.. sadly not the case. The combat itself is a fairly basic form of tab-targeting, with the character models and skill animations both being of.. I guess, China quality is the best way I can put it.

There is currently no release date planned for the game as the game doesn’t even have a fully updated website right now.
However, with how poorly the game has been received by beta testers thus far, if they don’t do something to remedy the issues that are quite obviously plaguing the game then we shouldn’t expect it to get a Western release.
Why? Because I highly doubt it’ll even get a full Eastern release.

This game has the potential to be something pretty damn awesome. But like the previously released Chinese Dragon Ball game, even though it has potential, it’s likely to remain untapped.

You can definitely tell Dragon Ball: Legend of Time and Space is “made in China.”

While we knew all along there are several mobile games based on Dragon Ball IP in the works, we totally missed out on the PC version, 龙珠时空传说 (or loosely translated to Dragon Ball: Legend of Time and Space). An officially-licensed PC MMORPG from Bandai Namco, the developer is Giant Network based in Shanghai. In case you did not know, it is one of the larger games developer below the tier of Tencent and NetEase. We came to know about Dragon Ball: Legend of Time and Space as it was showcased at ChinaJoy 2019.

Strangely enough, only the Taiwanese media Bahamut is reporting on this game, and we could not find any videos about its ChinaJoy appearance in the Chinese gaming media. Dragon Ball: Legend of Time and Space last had a Closed Beta test earlier this May. This game brought back some levels of nostalgia, as we once played the first MMORPG based on the IP, Dragon Ball Online, many years ago by Netmarble (yes it used to make PC games!)

There isn’t a lot of details going around right now, so here are some quick details we can make out from the 2nd part of the video above: 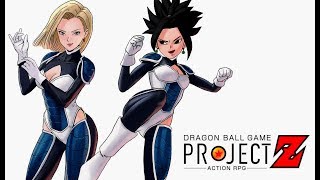 • There are 4 playable races: Saiyan, Earthling, Majin, and Namekian

• The Majin race in this game has the highest defense against damage, and the game description says its role is “melee defense.” Their control skills make them unique too. • The other 2 races are yet to be playable back in the January Closed Beta.

• The streamer mentioned that the game, in its first playable form, is worse than modern mobile games and would give it a score of 1 out of 10, followed by suggesting the team making this title should disband.

• There is currently no launch date for Dragon Ball: Legend of Time and Space, and the official website hasn’t been updated since May. Quite a surprise it was showcased at ChinaJoy with its own decorated booth!