Coincidentally, Brunstad Christian Church (BCC) has a year-round international Youth Exchange Program (YEP) in Stokke, Norway which may be slated to suffer the same fate. Brunstad Christian Church (originally called Smith’s Friends) has over 8,000 members in Norway and an additional 12,000 members in other nations. Founded by Johan Oscar Smith in the late 1890s, the group identified with Pentecostalism in 1906-1907. Smith’s younger brother, Aksel, initially cooperated with T. First I'd like to introduce, from time to time I will now write about a Norwegian Cult called Brunstad Christian Church, which has affected my family heavily during the last few decades, and which still does really bad things to many families and parents. This first part is about their female views. So, this I know mostly as 'Smith's Venner'.

The Brunstad Foundation’s largest operations are currently carried out at Brunstad within Sandefjord Municipality in Norway. Over the past 10 years, the foundation has contributed to a large-scale development, which has been estimated to cost around NOK 3,600 million.

The Brunstad Foundation and our subsidiaries therefore find ourselves within an extraordinary period of time. Extensive planning processes and preparations took place during the years before the construction started and in 2019 we put almost seven years of substantial and visible progress in the project behind us. We are proud to see that the progress is happening according to the plan and that we have good control of the costs of the project.

Extent of the development and cost framework

Preparatory construction work started in 2012 and the entire project has, on the whole, been planned to be completed in 2022.

The construction project has an expected cost framework of approximately NOK 3,600 million.

As of 31 December 2018, approximately NOK 2,500 million of this had been invested. Oslofjord Property AS, in addition, purchased the existing conference center from the Brunstad Foundation in 2015 for NOK 202 million.

In 2011, the Brunstad Foundation established the subsidiary Oslofjord Property AS. This company is the developer of the Oslofjord Convention Center expansion.

As of 31 December 2018, Oslofjord Property AS had an equity amounting to NOK 394 million.

The remaining financing for the construction project has been obtained as follows:

The advance leasing is paid to Oslofjord Property AS concurrently with the buildings being completed. All advance leasing paid is recognized linearly over the term of the agreements.

As of 31 December 2018, the Brunstad Foundation had an equity of NOK 1,011 million, which, to a significant extent, is tied up in property at Brunstad (building plots, as well as housing units built until 2006).

The capital that the Brunstad Foundation has lent to Oslofjord Property AS has been borrowed from Brunstad Christian Church as well as affiliated local associations in several countries. The church’s interest in the location has been to ensure that there is a place for gathering for international Christian conferences, but has not had any intention of owning or operating such a large estate.

Brunstad Foundation and its subsidiaries have no bank loans or loans from other financial institutions. The project has been fully financed in accordance with the model described and schematically presented above.

The Brunstad Foundation and its subsidiaries, together with advisors at Boston Consulting Group and EY, have worked out a long-term economic plan until 2030. 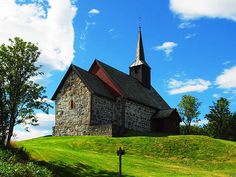 The plan shows a good return on invested capital, and thus also a good debt servicing capacity for the interest-bearing loans. The plans have, among other things, been based on extensive market analyzes for Oslofjord Convention Center AS’ commercial operations.

For more information about Oslofjord Convention Center AS visit www.oslofjord.com.

Risk assessment of the economic plan

In the spring of 2019, considerable effort was put into assessing the various risk factors of the economic plan. The biggest risk is related to the commercial operations of the subsidiary Oslofjord Convention Center AS. It was therefore crucial that this business receives the necessary framework conditions for success, and a management model was decided on, which will facilitate that. The company is to be run on an entirely commercial basis, regardless of the Foundation’s background and ideal objectives.

As long as the construction project is in progress, there is also a construction risk. Forecasting work is being carried out on an ongoing basis, and we have good historical figures from hotel buildings that have been completed, so the risk of major overruns on the remaining part of the project is relatively small.

There is still some risk associated with the payment of advance leasing for the agreements that have not already been paid in full. The last agreements are due for payment in December 2019.

We would also like to point out that all of the Brunstad Foundation’s auditor-approved annual reports are available on this website.

See also our ethical guidelines, as well as other useful information about our business entity.

How can a church claiming 'Victory over sin'get into so much trouble?
I am confronting the top leadership of the sect in which I got married, raised a family, and spent 15 of the best years of my life. This is just the beginning.
The sect now calls itself Brunstad Christian Church (BCC) -- formerly and more widely known as 'Smith's Friends' in English, 'Smiths Venner' in Scandinavia, and in other parts of the world by translations of the 'Norwegian Brothers'.

I recently published information about BCC, some of it historical, some of it reported over the last several years in the European press, and some of it my personal account of what BCC did to my family in the early 1990s -- things which we are still suffering from and struggling with. You can read about it in my blog post: Kåre J. “Waldo” Smith, Where Are You? (Note: My personal blog is not connected in any way to VårtLand or any other organization.)

I wrote the 'Waldo' post on the occasion of a letter to BCC's top leader. I knew him well enough to talk with him when I was a member of the sect. He knew me well enough to expel and excommunicate me from it in early 1994. I wrote him back then, too. The full text of both letters are featured in the 'Waldo' post, plus quite a few articles from the Dutch and Norwegian press, as well as insider information from current and former members.

BCC's top accountant, possibly the organization's third most powerful figure at the time, was arrested in March of 2016 in the Netherlands. Who knows how much incriminating evidence authorities have obtained from his testimony and his computers, including some 200,000 emails? In an email to BCC leaders, he wrote, 'I had to go along with no less than swindling, tax evasion, and manipulation of the members and leadership of its various organizations,' and, 'Leaveme in peace and I'll leave you in peace,' according to this Dagens Næringsliv article. He was arrested a few weeks later.
The title of the 'Waldo' post alludes to the fact that two of BCC's top leaders have left their beloved Norway and remain beyond the reach of the authorities that want to interview them.
If you think that BCC is a benign, normal Christian church, I encourage you to read my post about our experiences with it and its practices. Apart from my family's story, the information I present in the post is well-known among people in the sect and those familiar with it, most of it published in recognized European newspapers. I merely assembled and summarized that information. Authorities at local and national levels in Norway, the Netherlands and are now investigating the organization and its leaders.

If you or anyone you care about is involved with BCC, I urge you to educate yourself from sources that are more objective than people who sympathize and support the organization. Only then will you have the means to make an informed, unbiased, intelligent decision about it.